The Retired State Employees Association of Texas (“RSEATX”) was established with an initial and primary goal “to enhance and improve the status, benefits and morale of retired state employees.”  Today that remains the association’s primary goal.  RSEATX  has always been proud to affirm that representing retired state employees is its one and only goal, and it is the one organization in Texas with that status.

In early July, 1977, Henry Rothell, then representing the Texas Employment Commission, received a call from State Senator A. M. Aikin, Jr. of Paris, then Chairman of the Senate Finance Committee, with a request to help form a group to work for retiree benefits.  Aikin had been angry and upset when he realized that no employee group or organization would be working specifically for retirees during the next Legislative session, telling Rothell, “I want a group to look after retiree interests.”  Rothell, with J. Weldon Watson, L. C. Rouse, William G. Gibbs and Evangeline E. Lane, organized the Retired Employees Association, Inc., and on July 14, 1977 the Texas Secretary of State issued this group its Articles of Incorporation Charter.

The name was later changed to the Retired State Employees Association, Inc., to better define publicly the organization's membership.  Though the years, RSEATX has pursued many legislative agendas, but all had at their core a principled desire to improve retirees’ lives.

Since its inception, RSEATX has worked closely with the members of the Texas Legislature and their staff, with officials and staff of the Employees Retirement System of Texas (ERS), and with other organizations to protect and enhance retirement benefits for former State of Texas employees. Current priorities (in order of importance) include:

Operations are directed by an 11-member Board of Directors, which includes 4 officers (President, 1st Vice President, 2nd Vice President and Treasurer), elected by members of RSEATX.  The Board has a number of on-going committees to assure the needs of its members are addressed and that its membership continues to grow.  Today, RSEATX maintains offices at 314 Highland Mall Boulevard in Austin, Texas. 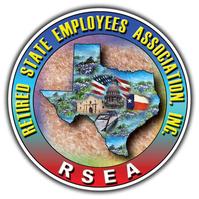